OBJECTIVE: RP and tDCS have shown promise for improving long-term retention. RP consists of retrieving information from long-term memory, making the retrieved information more accessible at a later time. TDCS consists of electrical stimulation of the cerebral cortex, which is capable of influencing cognitive processes via modulation of neuronal excitability. The present study investigated whether RP associated with anodal stimulation of the left dorsolateral prefrontal cortex (dlPFC), which is a cortical region associated with memory formation, could improve learning.

METHODS: One hundred and nineteen healthy individuals participated in this randomized, single-blind, placebo-controlled study. They learned a 40-word list either through RP or restudy (control condition) while undergoing 20 minutes of either anodal (2 mA) or sham (0.5 mA) stimulation of the left dlPFC (anode over F3 and cathode over Fp2; 10/20 system). Participants returned 48 hr later for a free recall and recognition test of the list.

CONCLUSIONS: The results support the effectiveness of RP in long-term memory retention. Anodal tDCS over the dlPFC did not enhance the positive effects of RP in free recall and recognition tests. However, anodal tDCS did reduce the number of intrusion errors in free recall. Given the role of dlPFC on working memory organization during encoding, it is possible that anodal stimulation over dlPFC may have improved organization during list encoding here, reducing the likelihood of falsely retrieving extralist items. 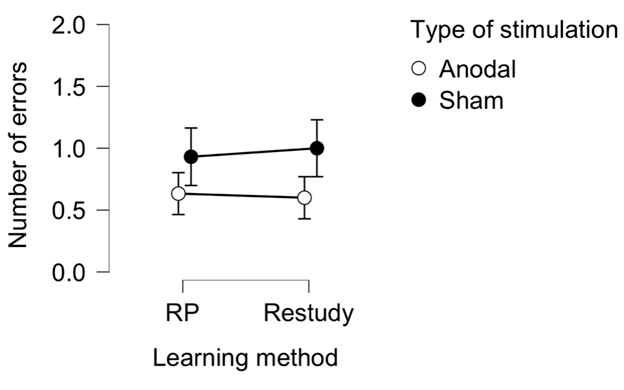 FUNDING/FINANCIAL SUPPORT: This work was supported by the Coordination for the Improvement of Higher Education Personnel (CAPES).