OBJECTIVE: To verify the effects of transcranial direct current (ETCC) stimulation in a patient with spinocerebellar ataxia type III, to analyze the static and dynamic balance using the BERG scale, to graduate ataxia using the ARDS scale, to analyze posture and gait disorders using the ICARS scale.

METHODS: The present study is a case study, based on the analysis of an individual case, of a patient with type III spinocerebellar ataxia. The service was based on: 10 initial minutes with pre-kinetic exercises. Then, 30 minutes of kinetic exercises concomitantly with ETCC. Ending with 10 minutes of post-kinetic exercises. 10 interventions were performed, 5 consecutive days with an interval of 2 days, immediately after another 5 consecutive ones. After four months, the scales were applied again to evaluate the results.

RESULTS: After the application of neuromodulation, it was possible to identify relevant meanings, when responses were observed through the scales. From the analysis, we note its evolution in the orthostatic position, in which there was a decrease in the oscillatory movements, in walking, thus managing to walk for more than 10 seconds without support and supervision in different angles and surfaces, in addition to the increase in speed , expressing better body biomechanical stability, providing anatomical cervical alignment. Analyzing the results table in column 2 (SARA) and 3 (ICARS), there is a decrease in the graph in both, thus demonstrating an improvement after transcranial stimulation, so that positive values ??represent a reduction and, therefore, a evolution. In contrast, in column 1 (BERG), there was a significant expressive in his score, because on this scale, the higher the score, the better the patient's performance, leaving an acceptable balance for a good balance. After stimulation, more functional independence was obtained for carrying out activities of daily living and decreased episodes of falling.

CONCLUSIONS: It is concluded that the application of neuromodulation in a patient with ataxia obtained relevant meanings, showing an improvement in coordination and postural balance when the comparison scales were applied after the application of ETCC. Thus, further in-depth studies on the use of neuromodulation are suggested, as it proves to be quite effective in clinical sequelae. 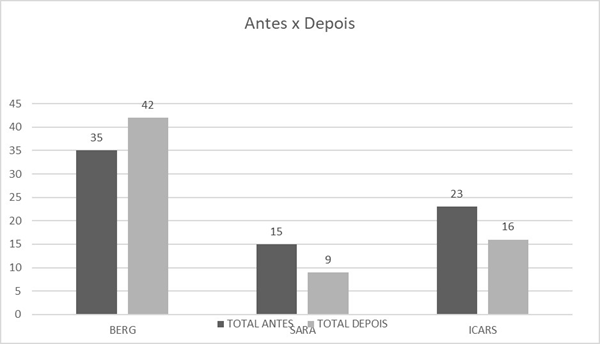 Comparative table before and after the application of etcc, using the SARA, BERG and ICARS scales.